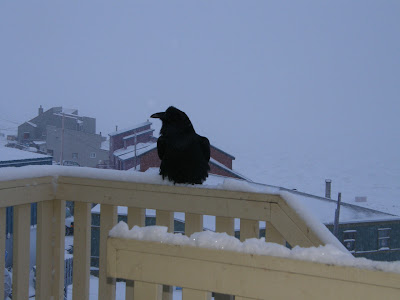 I don't have the creepy imagination of Poe, but am fascinated by our northern bird. Raven is very cagey.
At lunch today I searched the rooftops and wires for tulugak. He wasn't there, nowhere to be seen. So I tossed out the meat patty and waited. Not long; count thirty and swoosh, on the fly out of nowhere he grabs the patty. In close and noisy pursuit six others followed! Where were they?
How did they know? That patty didn't sit there two whole minutes!

Today my coworker told me about a dog that barks and runs his chain to scold the ravens on the rooftop. Sounds normal enough, squirrels would delight in scolding Caesar if he treed one of them.
But much smarter than a humble black squirrel, Raven turns his tail to the dog and ...and....yes poops on the dogs back!

The bird pictured here made noises I hadn't heard from a raven;he clucked a noise which sounded like two pieces of wood. uhuh wood. Then he said "doink".
Posted by Shelley at 11:35 PM

I saw the same thing in Inuvik - not a raven in sight, but as soon as you put a bag of groceries in the back of the truck there'd be half a dozen of them.