holes in the snow 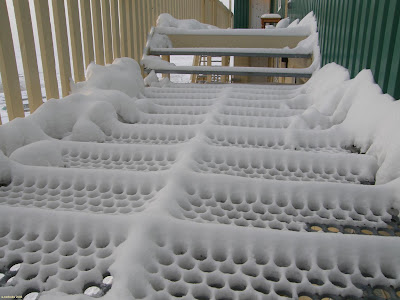 Every girl loves a sale, today was the pre Christmas craft sale (we're still allowed to say Christmas here instead of "Season"). We headed off, well prepared to line up in the snow and wind to wait for the door opening.
I had in mind to get two things only; kamiik for myself and a print to send to friends south. It was with some hope that Noah Maniapik would be there for I do like his work.

Both my wishes were fulfilled, as I came upon beautifully rendered kamiik. I kept one on my foot while I spoke with the sellers. Many people came along and handled the remaining one on the table. I felt lucky. They fit.
Noah was here and had stretched artistically from his standard style and had on hand two impressive compositions. Nervously I waited while a man handled the one that caught my eye. He decided against it. WhooHoo- Mine!
I won't say more about the artwork as I've yet to post the item south and want them to be surprised.

Exhausted we headed out for a brunch. Though Alan didn't join us he did offer to pick us up post meal. When he returned, he assured me that the kamiik were safe from the dog as they smell seal-y. No, he hadn't put them on the top shelf, yes they were in the bag on the chair, no the dog won't get to them....soon I discovered the reason; Caesar was waiting patiently in the truck. 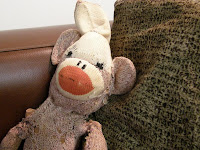 Get a picture up of the kamiks!!

Hi Shelley
As the recipient of the print I am very appreciative that you sent me this. As I described to you in my email message I really love it for many reasons. Jay and I will frame it and send you a photograph of it on our wall. I looked up the artist Noah Maniapik and Jay is happy that they were both born in 1961. Thank you again - Elaine and Jay