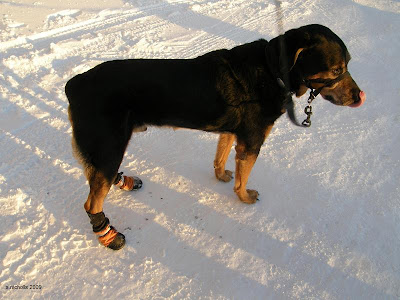 This new year brings Caesar a bittersweet gift. Booties. While he may appear as a large intimidating, ferocious animal, at heart he is a big baby. Often the extreme temperature of the snow and ground will have him stopped in his tracks. Literally, he wouldn't move, turn his eyes towards me as though I could change the snow under his feet. He's an old feller, turning eleven this year. Sometime pushing his rear end to get him moving again would be all that he needed. Which falls under the " I can't believe I have to do this" category.

This big hairy baby starts to tremble and clack his teeth while he is being shod. Which probably falls under his " I can't believe the humiliation" category.

The minute he is outside VOILA, the boots don't matter, and he doesn't run around trying to shake them off.
Maybe inside his little dog brain somewhere, somehow he will see the boots and think "walkies". 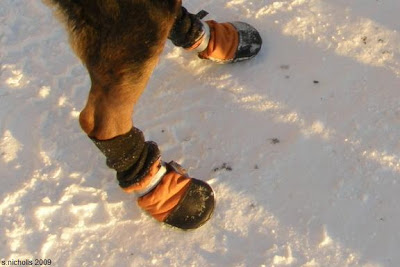 The booties worn on his back feet (as these seem to suffer the most in the snow), are shown here in a bright orange with a reflective stripe. They are fleece lined.

In other dog news, the only sealift we did this fall was dog food. Yes $1500 to bring dog food up here. As it turned out there was a small error in judgement (ahem) and we ended up with 2 yrs of food. Guess who decided he doesn't like it anymore? Yeah. So now to encourage him to eat enough calories each day of dog kibble, we've resorted to mixing in gravy or other enticing aromas. What puzzles me is he had eaten one bag of this brand last year and enthusiastically gobbled it up each meal. He's lost weight in his protest and we struggle to get him to fatten up for the cold weather.
Posted by Shelley at 1:16 PM

Hello again...
I know this food problem: when you buy loads of a kind its not wanted anymore! I am glad that I can buy different stuff each day for my pets (we don't like to each the same each day as well, don't we, ha?!!?)
Enjoy your day
Beatrice ♥